Yishun transport hub to open in 2019

Commuters in the north can soon look forward to the new Yishun Integrated Transport Hub (ITH), which will open by 2019. Northpark Residences, the condominium development sitting atop the ITH will also be opening for sales soon.

The Land Transport Authority said the new transport hub will comprise an air-conditioned bus interchange and an underpass linking the bus interchange to the nearby Yishun MRT station for more convenient and seamless transfers, as well as barrier free facilities.

Commuters can also look forward to more retail and commercial facilities, as the hub will be connected to a shopping mall.

Yishun’s new transport hub will have features such as LED lighting for the concourse and bus-park/driveway areas and a water-cooled air-conditioning system in accordance with the Building Construction Authority’s Green Mark Gold Plus standard.

Bus drivers and staff can look forward to a a larger staff lounge, dedicated staff toilets, kitchen facilities and a staff canteen.

With 19 public bus services1 operating out of the interchange, LTA will provide enhanced facilities such as a larger concourse, more commercial and retail areas, and better facilities for drivers. There are also fully sheltered connections between the bus interchange and Yishun MRT station. Temporary bus stops will be provided to continue to facilitate transfers to the Yishun MRT station.

Details of changes to bus routes as a result of the move to the temporary Yishun Bus Interchange are available at www.smrt.com.sg and www.sbstransit.com.sg.

Posted by knowsgproperty on March 3, 2015 in Residential

A NEW record has been set for Housing Board resale flats, with a 1,750 sq ft executive maisonette in Bishan changing hands for $1.01 million last month. It broke the previous record of $1 million, set by a 1,615 sq ft executive apartment in Queenstown last year.

Fresh data from the Singapore Real Estate Exchange (SRX), which collects transaction information from larger property firms, also revealed that such sky-high prices are not one-offs.

While only one resale flat transaction breached the $900,000 mark in 2011, there were 18 last year. This year, even before two months have gone, the number has already reached 18.

Property analysts said these flats, mostly in established estates, are still value for money on a per sq ft (psf) basis when compared to private homes.

They expect resale records to be broken when choice units like those at the Pinnacle@Duxton hit the market in the next two years.

PropNex chief executive Mohamed Ismail said the $1.01 million Bishan unit is about 100 sq ft bigger than other executive units, including the previous record holder in Queenstown.

“Such flats are rare, offer a large space and provide a better value proposition than condominiums around it,” he added.

Property consultant Chris Koh believes the unit may have special features such as an open roof terrace. “The buyer could be a cash-rich, private property downgrader and the cash premium paid is likely to be close to $200,000.”

According to the SRX, the overall median cash paid above a flat’s valuation is now about $34,000.

Mr Ismail noted that relatively new flats are also commanding high prices. Among the 18 transactions above $900,000 this year is a five-year-old, 1,180 sq ft, five-room flat in Jalan Membina.

“Although this sounds high, a flat in Jalan Membina is near Tiong Bahru MRT station and town. A private apartment could cost as much as $1,800 psf,” he added.

Most home buyers said they would not pay that much for public housing. Said accountant Mohan Singh, 29: “It’s still an HDB flat with no facilities at the end of the day. I feel buyers should go for affordable new flats or save up for a choice private property.”

In response to the surging property market, the Government has pledged to offer at least 23,000 new flats this year, with National Development Minister Khaw Boon Wan promising to keep new flats affordable by unpegging their prices from resale flats.

Posted by knowsgproperty on February 24, 2013 in Residential

Applicants in this category made up 30 per cent of the flats on offer – precisely the proportion of flats set aside for them – in the non-mature estates of Choa Chu Kang, Hougang and Yishun in last month’s Build-to-Order (BTO) exercise.

This means these applicants have a virtually 100 per cent chance of getting a BTO flat.

These probabilities fall, however, in the more popular mature estates of Ang Mo Kio, Kallang/ Whampoa and Tampines.

There, the number of married applicants with kids was almost 80 per cent of the flat supply – more than twice the 30 per cent allocation for them.

This is according to fresh figures provided yesterday by the HDB in response to queries from The Straits Times.

The Parenthood Priority Scheme was announced last month as part of a broader package of measures to spur marriage and parenthood in Singapore.

Under the scheme, 30 per cent of the flats in any launch of new BTO flats are reserved for married couples with children under the age of 16. This would enable such couples to secure their homes quicker and therefore encourage them to have children earlier.

The scheme took effect this year for the first time with the BTO launch of 3,346 units across six towns last month.

There were more than 12,000 bids for these flats and the HDB said yesterday that some 20 per cent of the first-timers applied under the new priority scheme.

Experts said yesterday it was no surprise that applicants with young children gunned for flats in mature towns, which have better transport links and amenities.

“It’s a safe bet that many of these buyers are staying with their parents in these towns,” said Dennis Wee Group spokesman Lee Sze Teck. “Their kids probably attend a neighbourhood school there, and this would mean minimum disruption overall.”

Mr Nicholas Mak noted that married couples in their late 30s to 40s are likely to have sufficient savings to go for larger flats in mature towns, which will typically appreciate more in value over the years.

He estimated that even more of such bidders might emerge when HDB launches “balance flats” for sale later this year. These are flats which are either close to completion or already built, and half the supply is reserved for this group.

Such flats would have a stronger appeal with families with young children, which have a more urgent need for a new home.

Noting that flats in mature towns were oversubscribed by these priority applicants, an HDB spokesman said those who are unsuccessful will get another chance to ballot for a flat.

This is because their names now go into the general pool of first-timers, which includes engaged couples and married couples without children. Between 85 per cent and 95 per cent of BTO flats in any launch are reserved for this group.

Mrs Celine Chia, who had hoped the new scheme would make a difference to her chances, looks to be able to rest easy. She had applied for a five-room flat in Hougang, after balloting unsuccessfully many times in the past.

But the 32-year-old account director said she is not counting her chickens just yet. “Right now, everything is still up in the air. I’ll only be assured once I get to choose my flat.”

Posted by knowsgproperty on February 18, 2013 in Residential

The Government has announced a slew of new rail transit projects which will be completed by 2030. By then, Singapore’s metro network will increase to 360km, from 178km today. The latest new rail projects were announced by Transport Minister Lui Tuck Yew during a visit to the Downtown Line 1’s Chinatown station Thursday morning confirmed speculation .

The biggest project will be for a 50km MRT line running from Changi to Jurong that will be up by 2030. Called the Cross Island Line, it will pass towns such as Loyang, Pasir Ris, Hougang, Ang Mo Kio, Bukit Timah, West Coast and Clementi along the way. And it will have interchanges with all the current radial lines. Part of the line will have an offshoot that links Punggol to Pasir Ris. 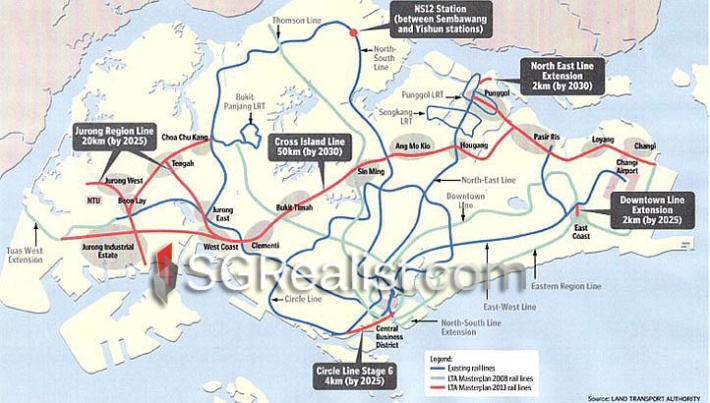 Next is the 20km Jurong Region Line, which is targeted for completion by 2025. It is a H-shaped network linking Choa Chu Kang, Tengah, Jurong East, West Coast, Boon Lay and Jurong West to the North-South and East-West lines. It could be a medium-load system that might have a stop at the Nanyang Technological University.

Also in the works, a 4km line that will make the Circle Line a complete circle, allowing easier access for commuters living or working on the western and eastern loops of the current line when it is completed around 2025.

The Government will also extend the North-East Line by one station north of Punggol. The 2km extension, when done by 2025, will serve the so-called “new Punggol Downtown”.

Another 2km extension project, due around 2025, will see Downtown Line 3 join the current East-West and future Eastern Region lines that runs through Marine Parade.

Finally, planners are also considering building a new station along the North-South Line between Yishun and Sembawang stations to serve future developments.

Posted by knowsgproperty on January 17, 2013 in General